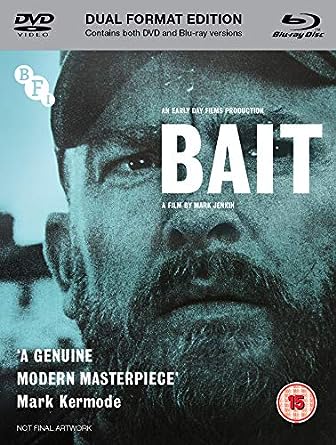 This is the tale of a fateful chain of events in a coastal Cornish community where there are tensions between locals no longer able to make a decent living from the traditional activity of fishing, and wealthy outsiders who can afford to buy picturesque cottages as second homes, but contribute nothing to the local community on their summer visits apart from their spoilt, bored kids patronising the local pub. The focus is on Martin who persists in trying to work as a fisherman, despite his lack of a boat – his laborious stretching of nets along the beach and planting of a single lobster pot yield meagre results . He has fallen out with his pragmatic brother, who has decided to use his boat to provide trips for tourists, and is full of brooding resentment against the couple to whom he has been forced to sell the family home. It is not just a question of fish bait, but of people baiting each other.

Hailed as a masterpiece by the critics for its unusual techniques, this is filmed in black-and-white with the sound added afterwards, using a handheld camera to produce often grainy shots in a square frame which tends to create the impression of not being able to see quite enough of an image which has been cropped. Although for the most part slow-paced, so that it feels longer than its duration of 88 minutes, I was not bored because of the need for intense concentration, in order not to miss some vital detail or simply to understand the heavily accented Cornish locals. The directors likes to use the device of almost subliminal shots to foreshadow what is to come, or to emphasise a dramatic past event. Scenes occurring simultaneously in different places are sometimes interwoven. In a Pinterish style, we may be bombarded with conversations occurring in parallel. More filming may be devoted to prising fish from a net than to the aftermath of a major event, such as the shocking climax of the drama.

I was left wondering whether the director had tried too hard “to be different”, and whether I would have preferred it to have been shot in shake-free colour to show the beauty of Cornwall, with a faster pace and a little more clarity over certain key events. However, on reflection the film “grew on me”: there is no harm in an unusual take on an interesting situation, nor in making an audience work a bit and deduce what is going on.