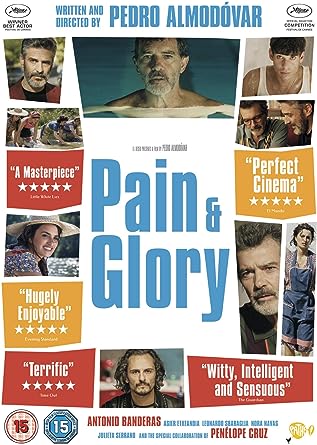 Superbly acted by Antonio Banderas, Salvador Mallo is a celebrated sixty-something film director whose sense that his career has come to an end is aggravated by poor health, particularly an aching back and tendency to choke. Desperate for pain relief, he is prompted to begin a drastic course of action which may prove self-destructive during his reunion with the charismatic but heroin-addicted former star of the film which fed his fame thirty years previously. At the same time, the meeting sets in motion a chain of events which may set him back on the path of creativity.

This has been described as semi-autobiographical in providing the director Almodovar with the chance to meditate on his own reflections on past influences and his own ageing and mortality. Yet it is far from a bleak or sad film: apart from the many moments of humour, the well-acted characters – as so often the case, the child actor portraying Salvador as a precocious little boy is particularly convincing – seem real in their expression of emotions and interactions with each other, arousing our sympathy, and there are many both emotionally subtle and visually striking scenes, particularly in the frequent flashbacks to Salvator’s impoverished childhood.

There is a sunlit nostalgia in the beautiful scene of his young mother (played by Penelope Cruz) washing sheets in the river, and singing in harmony with the other women as they stretch them out to dry on the bushes with the young boy looking on. Another very Spanish image is the neglected underground cave house in the catacombs which is the only home his feckless father has managed to find for his family. We see as it is gradually transformed with whitewash, exotic tiles and plants into a picturesque dwelling which a well-heeled visitor can admire, although Salvator’s mother points out that it still rains into the sunken living area which is covered only by an open metal grid. The deep bond is apparent between the mother and her only son, whom she forces to attend the seminary intended for priests as the only way of getting an education.

Salvator’s apartment in later life is a feast for the eyes, crammed with quirky furniture, priceless paintings and intriguing objets d’art. The darker side of Spanish cities is revealed during Salvator’s foray into the menacing locality of criminal gangs with scores to settle, drug pushers and drop-outs.

Although the plot is fairly thin and slow-paced, this is unimportant. This absorbing film is primarily a reflection on a flawed but talented artistic man’s life in a world of powerful visual images and empathy for people in their diversity.