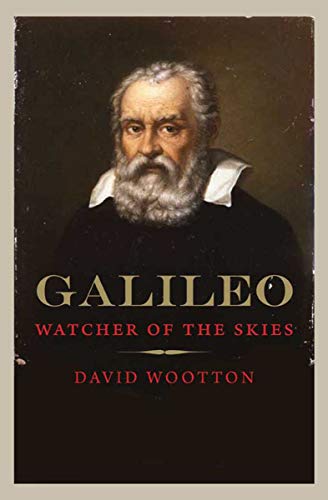 My fascination with Galileo, the brilliant thinker who was eventually gagged by a bigoted Inquisition, was fed by Michael White’s absorbing biography, “Galileo Antichrist”. Although very strong on childhood influences, personality, dealings with friends and family, his inventions and the tortuous path by which he fell foul of the priests pulling the strings behind an insecure and neurotic Pope, the biography seemed a little thin on the all-important scientific theories to do with motion and astronomy, and to have gone too far into trying to make ideas accessible by “dumbing down” the details.

In seeking out David Wootton’s much denser and more academic work, I got both more and less than I bargained for. Following an essentially chronological but more thematic approach, the author devotes lengthy passages to, for instance, experiments dealing with specific gravity, the physics of the motion of falling objects, or mathematical calculations to evaluate the respective merits of the theories of Aristotle and Ptolemy versus the more “heretical” Copernicus, and “fudged” Tycho Brahe. My lack of basic scientific knowledge made it hard for me to understand some of the author’s explanations and arguments, but I also suspected that, himself a historian, he may have strayed out of his own comfort zone. He certainly seems to make things overly complicated and long-winded.

Despite many examples of Galileo conducting practical experiments, Wootton is at pains to stress that these were mainly to demonstrate the truth of his real love, abstract theories, which is what led him to mathematics. Although he sometimes seemed too arrogantly confident, or perhaps simply busy, to put a theory to the test, he seems to me to have combined the two approaches, so that to suggest otherwise is hair-splitting. How could Galileo have done otherwise at a time when the words “experiment” and “scientist” were not used, and it was common for inquisitive thinkers to be polymaths.

Wootton concedes the limitations placed on historical research by the loss and corruption of data. So, we learn that much of the writing from Galileo’s most fertile period of invention was used by a butcher to wrap meat, or sold off as scrap paper. Similarly, his former student Viviani, who did so much to foster a positive legacy for Galileo, was not above fabricating appealing myths, such as the claim that he devised “the law of the pendulum” from observing the swinging of a lamp in Pisa Cathedral. However, in the absence of hard evidence, Wootton seems to me to indulge in too much academic conjecture as to, for example, the extent to which Galileo was a Catholic or even a Christian. For a man born in 1564, I see no contradiction in the fact that he, with unconscious male chauvinism, sent his two daughters to be nuns, that he paid lip service to Catholic belief when there was an Inquisition actively engaged in torturing and executing alleged heretics, but was dedicated to the pursuit of scientific enquiry which some Jesuits themselves pursued, yet could not deny what his reason told him to be true, unless his own life was at risk.

Not until two-thirds of the way through does Wootton state that his “primary purpose is to provide an intellectual biography of one of the world’s greatest scientists-to reconstruct the development of his ideas over time”. At the same time, he observes that, ”Amongst professional historians, biography is not an intellectually respectable genre”. He then makes what seems like a self-evident case for what he calls “a characterological approach to biography” to enable us to understand the study of scientific progress and cultural change, fitting themes for a historian, it would seem. This line of argument appears unnecessarily tortuous. However it explains why Wootton glosses over Galileo’s childhood and career, and why references to his family often seem awkwardly squeezed in, sometimes so condensed as to be hard to follow. I was troubled by the subjectivity of a chapter suggesting out of the blue that a bullying and devious mother may have been to blame for his reluctance to get married, his lack of communication as regards his emotional attachments and private beliefs, and also explain his aggressive, driven personality. In his summing up, Wootton writes, “the paternal conflict between experience and reason and the maternal conflict between power and influence shaped Galileo’s internal life and constitute the cosmography of his self” but I could not find clear and convincing passages in the book to support this.

Similarly, I was surprised by the author’s sudden break from the build-up to Galileo’s trial in order to speculate on his frustration over a missed opportunity to consummate a relationship with some married woman, Alessandra Buonamici who had not clearly figured in the story before. I would have preferred more along the lines of the moving account of Galileo’s close relationship with his daughter Marie-Celeste, a nun, to provide a more fleshed out picture of the man.

Although the work is informative and gripping in places, it continually frustrated me by failing to provide the further insights and deeper analysis I was seeking. The above factors make it an unnecessarily hard and opaque slog at times.