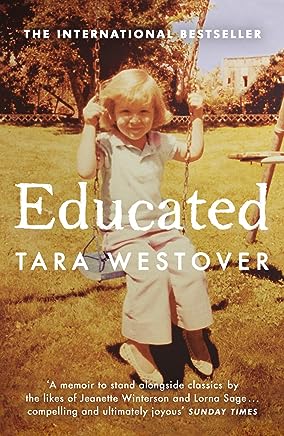 The youngest of seven children, Tara Westover was brought up after a bizarre fashion in rural Idaho by a father whose dominant and possibly bi-polar personality fed an extreme form of Mormonism. Using his children as cheap labour, Gene Westover (most family names used are pseudonyms) ran a scrapyard with scant regard for health and safety. He regarded the succession of gruesome injuries which ensued as God-given opportunities to prove the efficacy of the herbal remedies his submissive wife spent much of her time concocting. Hospitals were dangerous places run by “gentiles” to be avoided at all costs, antibiotics and analgesics likely to cause permanent harm. He was obsessed with storing up food and fuel for the long awaited Days of Abomination, the period of chaos which would precede the Second Coming of Christ, which he was convinced would be triggered by Y2K, the expected January 1st 2000 millennium computer failure. His other great obsession was to avoid corrupting state education, insisting that his children be home-schooled, but in such an unorganised way that they were left with no qualifications and woefully ignorant.

As soon as they were old enough, his offspring left home, either to drive trucks and do manual work, which generally meant they drifted back eventually, or as the only means of obtaining an education. Perhaps because she was a girl for whom “book-learning” was considered a particular waste of time since her “destiny” was to become a good wife and mother, Tara found it particularly hard to break free and get into college. Yet through ability and determination combined with the luck of catching the eye of a tutor at the Mormon college who could see her potential, she won a place on a study programme at Cambridge and gained a PhD by her late twenties.

This memoir often seems disjointed, even incoherent and inconsistent when dealing with the more dramatic events. The author admits to the problem of remembering exactly what happened when, say, a brother’s clothing caught fire in the scrapyard, or of dealing with differing recollections of the same incident. This may be what led to her interest in “historiography”, of the varied ways in which historians interpret the past. However, there’s no denying that I was left with the impression that much of the drama had gained in the telling. Apart from the frequent ability to avoid death or paralysis after falling from a great height or gaining third degree burns, there are a litany of inconsistencies.

Admittedly, his psychosis may serve as an excuse, but if Tara’s father forcibly pulled Tara’s sleeves down for the sake of modesty when she was working in the yard on a hot day, why did he let her put on make up to go out repeatedly with a local boy after work? I could understand “Dad’s” somewhat ungodly pride in her singing abilities, but would he have let her mother dye her hair red for her lead part in “Annie”? Would Tara’s parents have paid for her to have orthodontic treatment when they had not done so for her brother Shawn, and had such a horror of medical treatment? When she eventually reached King’s College Cambridge, lacking in confidence and nervous of drawing attention to herself, would she really have either sought or been permitted to stride up the sloping tiles to walk along the ridge during a tour of the roof?

Despite these reservations, this is an intriguing insight into how abuse of power and emotional blackmail may distort family relationships, leading to self-delusion and doublethink which the the changes in perception brought about by education cannot eradicate without a lengthy struggle. Breaking free comes at the price of a painful and guilt-ridden rift with close family members and poignant exile from familiar haunts, in this case the backdrop of the wild solitude of  “Buck’s Peak”.