The sudden disappearance of Adèle Bedeau, the surly waitress at the real-life Restaurant de la Cloche in the “unremarkable” town of Saint-Louis on the French-Swiss border triggers the chain of events in what proves to be a psychological drama involving the two main protagonists in opposite camps, yet oddly similar in some ways. 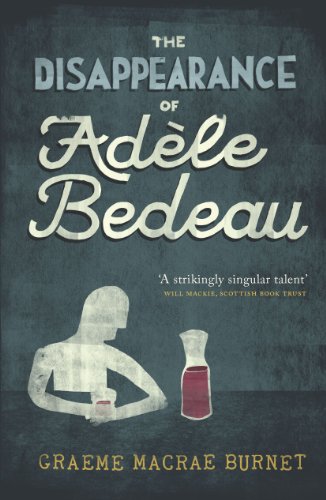 Manfred Baumann, an outsider by reason of his Swiss father’s surname and his own awkward personality, manages a bank in the town. Bound by routine, obsessively tidy, unable to form social relationships despite living in Saint-Louis for years and doomed to rub people up the wrong way without meaning to do so, Manfred would also make a good detective in his close observation of his surroundings, his eye for detail and speculation on people’s behaviour – as often as not misconstruing their motives (perhaps not so useful for a sleuth!). What past events make him so secretive and prone to persist in a needless lie, which may in fact make him the subject of suspicion? Why are his emotions so repressed, and do they have a tendency to burst out in acts of violence?

The detective deployed to investigate Adèle’s disappearance is Gorski, a man of unusual persistence, who works on the basis of evidence, scorning the reliance on “hunches” of work colleagues, also haunted by his failure to solve the murder of a girl some twenty years earlier, for which a man he believes to be innocent was found guilty, later dying in prison. Found wanting by his snobbish middle-class wife, Gorski might have felt more at home if he had followed his father’s wishes and taken over the family pawn shop.

It would seem better known in France where it was apparently made into a film by Chabrol, Brunet’s novel has been brought to English readers in a superb translation (in that in never seems like one) by Graeme Macrae Burnet who made his name with the unusual murder story “His Bloody Project”, and could well have written this novel himself. I was fascinated by his “afterword” which reveals the intriguing similarities between the original author Raymond Brunet and his creation Manfred Baumann. An only child like him, attached to his mother but losing his father at an early age, Brunet too was “chronically shy”, never known to have a girlfriend nor to be gay, regarded as “aloof and superior” at work, and was a frequent patron of the Restaurant de la Cloche, until the discovery of his negative portrayal of the place together with its regular customers made it uncomfortable for him to go there. In fact, Brunet identified so closely with Baumann that he was devastated by Chabrol’s portrayal of him as “somewhat comic and pathetic”.

In short, an unexpectedly good read.