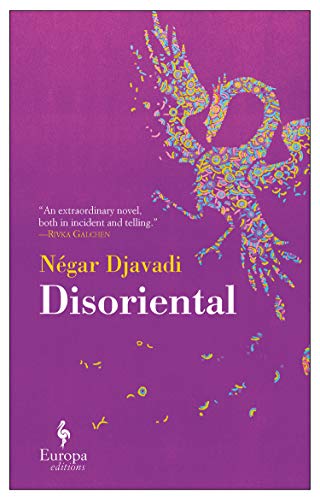 Born into an Iranian family of intellectuals who opposed the regimes of both the Shah and Khomeini, author Négar Djavidi arrived in France aged 11 after crossing the mountains of Kurdistan on horseback with her mother and sister. This gives an authentic ring  and some autobiographical elements to her acclaimed first novel.

It is a family saga covering four generations of an Iranian family  over more than a century of dramatic political and cultural change from exotically named feudal lord  Montazemolmolk living in the northern region of Mazandaran, with his harem of more than fifty bickering wives to grandson Darius, a dissident intellectual whose writing against first the Shah and then Ayatollah Khomeini forces him into exile in Paris with his family, including daughter Kimiâ, the narrator.

Much of the story is related in the form of flashbacks or imagined reconstructions of anecdotes Kimiâ has heard about her relatives, recalled as she sits, clutching a tube of sperm, in the waiting room of a Paris fertility clinic. This rather clunky plot device adds to the reader’s frequent confusion over the large number of often thinly sketched characters, like the brothers of Darius who are referred to by numbers 1 to 6 (there is a list of key family members at the back which you could miss until too late) and continual lengthy digressions.  The approach is deliberate in that the author has explained when interviewed her aim to portray the fragmented, kaleidoscopic nature of memory. Although this has received critical praise, I found the abrupt switches in her thoughts, usually expressed in dense exposition, quite hard to take. A stream of consciousness  can be very powerful, but in this case the continual change of subject is further disrupted when Kimiâ becomes an intrusive narrator,  justifying or apologising for an abrupt switch of topic:  “Allow me before it’s too late, before the storm of the Revolution rises and invades my story, to return to my resemblance to Grandmother”.  Dramatic events are undermined by a lack of subtlety,  even giving them an incongruous pantomime quality, as in the continual foreshadowing of  “L’ÉVÉNEMENT” (“THE EVENT”).

Continually being told what to think, trying to keep track of the characters as they flit in and out, mentioned in passing, I rarely engaged with any of them. The author is  by profession a script writer, so I am surprised that she did not make more use of scenes with dialogues which would have enabled the characters to reveal themselves, open to interpretation as we do in real life. The details of the occasional footnotes to provide a condensed history of events could have been woven into the story, or included as an introduction at the outset.

Kimiâ is “disoriented” in more than one sense: not only the abrupt cultural change from Teheran to Paris via an arduous trek led by people smugglers, but also confusion over her sexuality. Predicted by her tealeaf reading grandmother to be a boy, she acts and feels like one, imagining herself growing up to be a man. Her period of extreme teenage rebellion in Paris, dressing as a punk, drinking and smoking joints in shared squats after her perplexed mother has thrown her out is therefore a way of taking refuge in a world where her background is of no interest and she is not judged. She ends up in a relationship with a woman, but desperate to have children fathered by a man who will take an interest in his children, and able to provide the kind of cultural context she has lost in exile.

Although I think a heavily pruned version of the story with fewer characters would have been much more effective and allowed more space to develop some interesting ideas, perhaps the style is in the tradition of Iranian storytelling, so that an oppressively large cast of relatives bound in a love-hate relationship, and strong ties of mutual support and obligation, somehow co-existing with harsh judgement and rejection e.g. of homosexuality (to the extent of denying its existence), serve to provide the necessary insight into Iranian life.  By contrast, Kimiâ’s  adult world of punk and pop groups and artificial insemination for lesbians using sperm from an HIV positive man,  is not really typical of the West, and is a rather extreme example of the contrast between the freedom of the West and the conservatism of Iran.

There are some interesting comparisons e.g. whereas the Paris clinic is tense and silent, in Iran people would be so engaged in chatting that they would not notice when their turn to be seen arrived!  When the mother of Kimiâ’s partner  confuses Iran with Saddam Hussein’s Iraq, Kimiâ sees this as the result of living in Belgium, a reassuring, peaceful place where everyone’s the same, after living for generations free of problems without any immigration or mixing: “no need to concern oneself with other people,  nor to be afraid of them, nor question their presence”.  This of course shows a lack of knowledge and understanding on both sides!

Although I read this in the original French, I believe the English translation is very faithful to it.