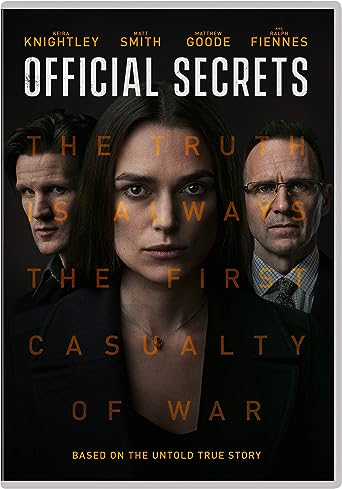 I remember well the 2003 one million-plus people’s London march in the vain attempt to prevent the Iraq War, likewise President Bush’s refusal to wait for the completion of UN weapons inspector Hans Blick’s investigations in Iraq before launching an attack, together with the UK Parliament’s decision to support the US militarily on the basis of what proved to be the “dodgy dossier”, falsely confirming the Iraqi capacity to launch weapons of mass destruction on Britain in 45 minutes.

Film footage of these events is woven into the docudrama “Official Secrets” to provide the context for an event which I am ashamed to have forgotten, namely the remarkably courageous decision of Katharine Gun, a young translator working for GCHQ, to release to the press the email which shocked her profoundly. Wrapped in technical language, this was the instruction from the American NSA for its counterpart GCHQ to “dig dirt” on officials in small UN member countries who might be blackmailed into agreeing to vote for military action against Iraq. Motivated by the desire to prevent a war triggered by lies and subterfuge, she assumed at first that it would be possible to remain anonymous, until a guilty conscience over the sight of her work colleagues being interrogated obliged her to speak out. Then, it quickly became obvious that she had not only sacrificed her career, but risked a prison sentence, widespread ostracism, and the deportation of her husband, a Kurdish asylum seeker from Turkey.

Keira Knightley deserves the praise received for a performance which conveys with great conviction Katharine’s initial soul-searching, and the acute tension, involuntary sense of guilt and fear of detection, experienced by an essentially law-abiding person breaking the law, even for a just cause, as in the crucial moment when she drops the leaked email into the red pillar box. Her moods pass through realistic phases: more guilt and regret over the problems inadvertently created for her husband, depression over being unemployed, anger over bullying by officials and being pressed to take the “easy path” of admitting to guilt to get a lighter sentence, at the cost of a permanent stain on her reputation, which still matters to her.

A docudrama which could become dry once it enters the legal phase with a long wait to be charged and tried, maintains its momentum through moments of wry humour based on real events. I would not blame the film-makers for possibly over-egging some incidents for dramatic effect, and cannot know how much artistic licence has been taken in portrayal of, for instance, the sparring between former legal friends who find themselves in opposite camps, prosecutors against defence. If they are still alive, I wonder how some of the latter feel about the way they have been portrayed.

Overall, this is a well-made and thought-provoking film, raising awareness of strong parallels between then and now – our world of fake news, hacking and manipulating facts for political reasons, and the endless debate as to whether the means justify the ends. Interviews with the real-life Katharine Gun suggest the storyline is authentic in more than the essentials. Claiming that she would act in the same way again, she has the last word: “Truth always matters at the end of the day”.