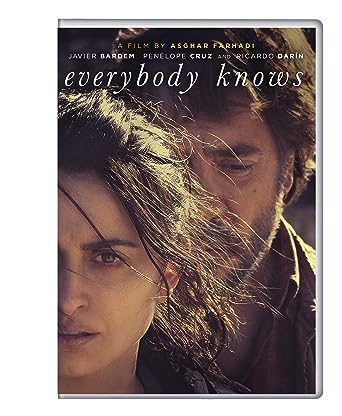 Laura returns from Argentina with her lively, in fact somewhat out-of-hand, teenage daughter Irene and cute little son to attend her sister’s wedding in their picturesquely run-down home town set among Spanish vineyards. The gifted Iranian film director Asghar Farhadi captures the atmosphere of a big, traditional Spanish wedding. Guests sit in mute respect with a few wry grins when the priest takes an unexpected peal of the church bells as a cue to request more money for repairs, on the lines of gifts of money received from Laura’s supposedly wealthy husband Alejandro, who has stayed behind in Argentina, apparently for his work. Later, as the bride steps out in a stylish flamenco, they all dance and carouse into the small hours, until the discovery of Irene’s abduction from her bed during a clearly planned power cut.

Despite speculation that Irene may have engineered her own disappearance, a more sinister explanation seems likely as her bed is strewn with warning cuttings about an unsolved kidnapping in the past which led to the death of a local girl, because her family ignored instructions and went to the police. Distraught with grief and fear, it is not surprising that Laura also refuses to report her daughter’s disappearance.

Tension remains high in this psychological drama, as Laura’s friend and former lover Paco, a successful local vineyard owner, plays a major part in both searching for the girl and obtaining the ransom money, if only to string the kidnappers along when Alejandro appears, trusting only to God to save his daughter since he is in fact bankrupt. As the plot develops, long-held resentments and possible motives for both kidnap and ransom are gradually revealed in this inward-looking community with its tight gossip grapevine in which “everyone knows” each other’s past secrets, or thinks that this is the case.

What some have described as a rather weak ending struck me as very effective. The viewer is left free to decide what happens next. The most interesting question left unanswered is whether information which belatedly becomes available about the crime will be widely shared and acted upon, or suppressed like other secrets, for ulterior motives.

The film is visually striking and well-acted, particularly by Javier Bardem in the role of Paco, and Barbara Lennie as his wife Bea. Apart from one or two flaws in the plot which, as ever, one does not notice at the time, this is an entertaining yarn which can be appreciated at a deeper level.