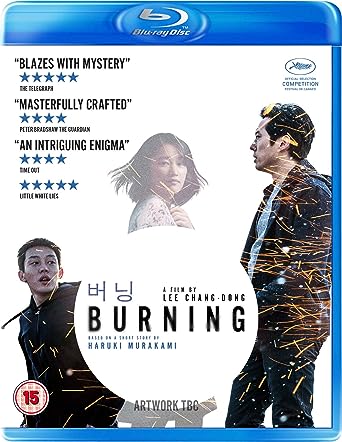 Based on a short story by Murakami and set in South Korea under the skilful direction of Lee Chang-dong, this slow-paced psychological drama, atmospheric and at times surreal, builds up to an unpredictable dramatic climax. Even without this, it repays watching for its insights into life in South Korea, with the bizarre contrast between the high rise development and brash consumerism of a western-style city and the enduring, unmaterialistic, traditional life in the countryside, given a bizarre twist by proximity to the border with North Korea, its watchtowers blaring out propaganda are within earshot.

Jong-su is a young graduate with a dead-end job, whose expressionless, somewhat pudgy features belie his internal drive to be a writer, like his western idols including William Faulkner. On an errand in the city, he is accosted by an acquaintance from his schooldays on the family smallholding, the flirtatious Hae-mi who seems possibly a little unbalanced. They begin a sexual relationship, but when Hae-mi returns from a brief holiday with a suave, rich young man called Ben in tow, Jong-su does not react much, yet perhaps still waters run deeper than one imagines.

Meanwhile, his father’s imprisonment for a violent incident triggered by ongoing anger management problems, again an indication that Jong-su himself may not be as calm as he seems, obliges him to return to the village to look after his father’s property. On an unexpected visit, Ben talks of his obsession with setting fire to greenhouses, of which there are quite a few in the area. Then Hae-mi disappears and the once passive Jong-su becomes intent on finding her, together with keeping an eye on the local greenhouses.

An intriguing and memorable film about obsession and jealousy.