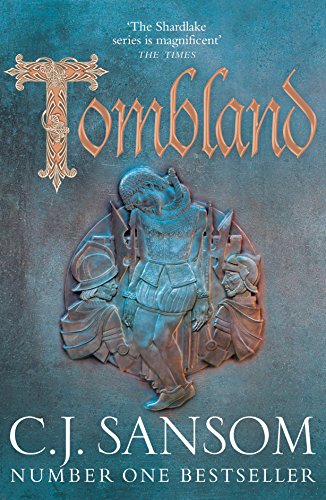 It is 1549, with the boy-king Edward VI on the throne and his ambitious uncle Edward Duke of Somerset the virtual ruler in his role of Lord Protector. People are already beginning to voice regret over the passing of Henry VIII and England is ripe for rebellion with the grim imposition of fanatical Protestantism and acute poverty aggravated by the cost of on-going wars and the debased currency, but in particular by the accelerating pace of enclosure by wealthier landowners of the common land  vital for the survival of their poorer neighbours.

In the seventh novel in this series, courageous, persistent, incorruptible, liberal-minded lawyer Matthew Shardlake is asked to investigate discreetly a murder charge against John Boleyn, a relative of the king’s sister, the young Princess Elizabeth. Since the Boleyns are out of favour, he may have been framed.

This plot-line is side-lined by the eruption of Kent’s Rebellion on the fringes of  Norwich. Workers who have been subservient all their lives gain confidence and determination in the new-found freedom of the camp on the sandy heath above the city, where they are trained to fight in the event of the Protector failing to accept their demands for reform.  Tension builds with the news of the approaching the army sent to quell their resistance. As the prospect of failure and reprisals grows, some begin to question the decisions of their charismatic leader Robert Kett.

Although sometimes bearing too close a resemblance to a schools’ history documentary, this theme is quite gripping with a range of well-developed characters and certainly raised my interest in a significant happening of which I was unaware, despite having studied A Level History. The lengthy essay at the end shows the book to be remarkably faithful to known events, as well as indicating what some have criticised as the author’s obsession with the theme. One caveat: would the shrewd and cautious Shardlake really have agreed to act as Kett’s legal advisor with so little apparent internal doubt and fear?

I found the details and handling of the Boleyn murder mystery less satisfactory, with an over-reliance on coincidence and a somewhat implausible denouement. Too many of the characters seem to be caricatures, or two-dimensional, the villains ludicrously villainous. The two threads of murder mystery and rebellion are welded too crudely together.  The novel is hard going by reason of its unnecessary length, padded out with repetition or superfluity of detail, or simply verbosity. However, it seems that famous, successful authors are no longer required to spend time editing, and no one else bothers if it is a “guaranteed” best seller.