This is my review of the Romanian film “The Graduation”. 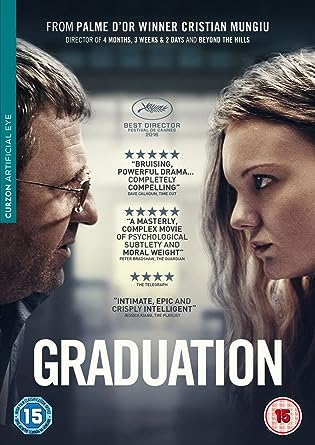 Hospital doctor Romeo may have become estranged from his chain-smoking librarian wife through their mutual disillusion with life in post-Communist Romania, which has not live up to their expectations. Their hopes are pinned on their bright daughter Eliza who is set to win a scholarship to study in England. As a result of an ill-timed mugging, her hand is too injured for her to write in the final exams. Determined to act out of character and pull strings to ensure his daughter obtains the necessary grades, Romeo finds himself in conflict with both his wife and the daughter they have taught to be honest. Eliza’s infatuation with her biker boyfriend, who ironically has no compunction over having cheated in his own exams, may be an additional factor in her desire to stay in the dead-end community from which her parents are so keen to save her.

This novel is a fascinating study of ethics and morality in a society which has slipped into bribery through custom and practice. How can one live with integrity in such a world. To what extent may the ends justify the means?

In addition to the convincing character studies and well-developed plot, there is a strong sense of place. My only criticism is that the meaning of certain scenes, apparently peripheral to the main plot, remained unclear to me. I also found the ending somewhat downbeat. Yet as a naturalistic, authentic piece of drama this is very powerful. The title is a little misleading, since “graduation” is normally applied to leaving university rather than school.